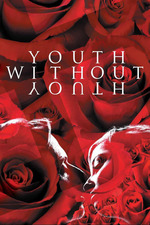 Francis Ford Coppola's metaphysical superhero sci-fi epic, I think? As seems to be the norm with FFC's 21st century outings, tough to classify and tougher to crack. Youth Without Youth is a lot to take in, a dizzyingly dense tale of humanity's place in the universe. FFC shows a lot of tonal restraint for material dealing with such an immense and ambitious subject, though- this is a quiet drama from beginning to end, with a million ideas simmering just beneath the surface, threatening to break free into a wild mess of a movie but always staying sturdy and secure. Part of me wishes it went all-out and explored the extent of its philosophy and theory, but I really do love what's here. It's not a surprise that critics and fans haven't really known what to do with Neo-Coppola, but I think slowly but surely consensus will come around. I might be underrating this.