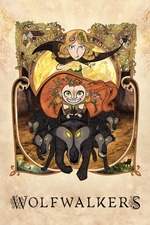 it's like a Disney renaissance film where there is no corporate cynicism. every ounce of this film is filled to the brim with passion. there's nothing i love more than watching a film where the filmmakers clearly adored making it.

its visuals start out beautiful, and it keeps pushing its own boundaries. this is Cartoon Saloon's style in its most fully realized form. jaw-dropping shots, colors, designs, and 𝘮𝘰𝘷𝘦𝘮𝘦𝘯𝘵. UGH, the way these characters move is just glorious to watch.

the music and vibe whisk me away into a fairy tale like i haven't experienced in... maybe ever. never once were my thoughts in my head. only in this world with these characters. and that song in the middle was maybe my cinematic highlight of the year.

the themes echo things we've seen in other children's films, but carry much more weight. it effortlessly weaves together the theming of environmentalism, xenophobia, authoritarianism & theocracy, feminism, and found family into a narrative that feels so natural and honest.

this is the film that will solidify Cartoon Saloon as the true successor to Ghibli, and this is my first 10 of 2020. i love this so damn much.