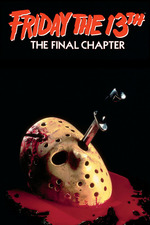 Well, at least it has the best poster in the series, one that I often remember seeing at the video store, and conjuring up all kinds of images of what must be contained on the tape in that clamshell case.
I certainly didn’t miss all the 3D nonsense from the last movie. The absence of it here helps to show how unnecessary it is in nearly any film. None of the group of vacationers stand out much, maybe save for Crispin Glover. I’d say he was weird in this, but that’s like saying water is wet.

Billed as the final chapter, but in a way, we were just barely getting to know Jason. Too bad we got to see about as much of him here as in part 3. I mean we know what Jason looks like, just show him to us already. He could have been Jaws the first hour (albeit with a human hand) for all I know. The direction is more assured, and the Blu-ray image is the clearest I’ve seen yet from the new set, but as this is generally considered a high point for the series, I’m not sure any of the sequels will reach 4-star level for me (next two are 1st time watches). The kills in this installment are the least creative IMO so far.

Perhaps watching these a year apart, the known successful money-making formula of stalk-n-slash with a theater crowd allowed you to forgive a lot of the repetitive elements and have more fun. Only viewing these 5 days apart so far, this one doesn’t present a whole lot new. For a film that introduces the important Tommy Jarvis character, and a feature-lengths’ worth of time for masked Jason, it spends a little too much time away from either of them. The final 10+ minutes of this are really good, but it can be tough going honestly to get there. Knowing this is not “The Final Chapter” as advertised knocks it down a peg.