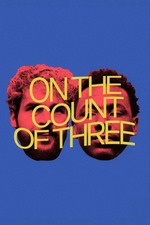 "When a customer is talking, you listen bro! It hurts to be ignored!"

I love how this is the first movie to feature the Filet-O-Fish song.

Jerrod Carmichael has been audacious out of the gate, ever since his splash in 2014 with his superb bit part in "Neighbors" playing the Bi-curious stoner, and his incredible Spike Lee directed debut stand up special. Then he probably made the last watchable multi-cam sitcom, that tackled the Bill Cosby scandal and homophobia. Now with his feature length directorial debut "On the Count of Three", I really hope it goes down as a Sundance classic. This was the most twisted, tar-black comedy I've seen since maybe "Observe and Report".

Val(Carmichael) and Kevin(a maybe career best Christopher Abbott) are 2 best friends who make a pact to kill each other by the end of the day. Val breaks Kevin out of a mental hospital(3 days after Kevin tried killing himself), and Kevin decides he wants to seek vengeance. His therapist(a chilling Henry Winkler) may or may not have helped Kevin have a more fucked up state of mind. And Val is having a quarter life crisis after his girlfriend drops a bombshell on him.

Jerrod Carmichael, every time he's shown up in something, I always wish he was in it more. Now that he steps into the spotlight as a lead, he has finally proven that he is The Millennial Emo-Dave Chappelle for a new generation. His cadence, his delivery, chain smoking, even his wardrobe(very reminiscent of Chappelle's Half Baked work uniform), he's perfect. I would love to see Carmichael in darker roles like Val in the future. Abbott who's been on my radar since "A Most Violent Year", is an actor who just always seemed ahead of his time. He's proven time and time again that he can be an emotional powerhouse, but his comic timing on display here is sublime. It's like Shia LaBeouf had James Franco's comic timing. It's kinda not fair that Abbott is playing the most fascinating character here, he's so natural, he makes it look easy. It's such a heartbreaking and simultaneously colorful performance, it's brilliant work. And I want his jacket. He and Carmichael have extraordinary chemistry, really breathing life into this friendship. We get some great bit parts from Tiffany Haddish, Lavell Crawford and Jared Abrahamson, but this is really owned by Carmichael and Abbott.

The film is incredibly funny, despite the massively dark undertones. This premise will divide people, that's for sure. Some might say it's glorifying mental illness and guns, but I think the script(brilliantly written by Ari Katcher and Ryan Welch) toes the line expertly with its tonal switches, which feel like The Safdie bros took over from the otherwise Coen Bros meets Harmony Korine-esque tone. And I think the moral ambiguity of the protagonists, truthfully showcase the mental struggle people go through(ok maybe not to THIS EXTENT lol but shit like this COULD happen). It's also expertly shot and the Arcade Fire score is beautifully jazzy and thrilling. And the soundtrack has great needle drops from Papa Roach, Metallica and Roddy Rich.

This isn't a perfect debut, sadly. It might balance tone better than most debuts, but certain quiet moments(without spoiling) sort of derail from the fast pace and insane comedic flourishes. JB Smoove's scene also left me scratching my head, despite the good acting. This was also barely 80 minutes(they should also re-do the ending shot/scene), but the bizarre structure of the story juxtaposed with these mentally unstable characters made perfect sense to me.

I love whenever an original debut hits the population, because love or hate this film, it's undeniably daring and emotionally cathartic. It's brutally funny and masterfully directed by Carmichael. Sign me up for another Carmichael Joint, please and thank you.

This will also be very quoteable for me, but I'm only giving you this.

"And if any of you knew how to help me by now, you WOULD HAVE FUCKIN DONE IT. And why the FUCK are you guys all so obsessed with keeping everybody alive anyway? Like what, do you think that all life is precious? Really? ALL LIFE? Because if you lived in my head for one minute you would know that IT FUCKING ISN'T. What did you write down??*pause* BITCH."