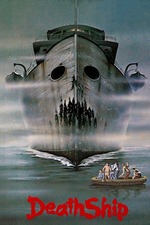 I don't understand how hard it is to come across a movie that truly captures a haunted house atmosphere, especially when the good ones like this make it feel so effortless. This is truly haunting at times, even as it works in a familiar genre wraparound. The sense of horror is handled the right way, with things being shown to us but never being overexplained, leaving the mystery of it to play in the back of our heads. Maybe it's because I worked on a ship that large for a bit and know how cavernous and mind-bending they are, but the setting was perfect, utilized far more effectively than mega-budget films that have come along in later years. The physicality of the stunts were impressive as well; a few moments leaving me with my heart in my throat as it never cuts away from scary falls or ladders collapsing. It's a great example of how CGI and quick edits can ruin so many things in a movie. The film as a whole is shot wonderfully, the camera flowing and moving to give a sense of life to what is essentially just machinery moving. It's hard to pull off, but damn does this movie make it feel easy. A few elements are a little too predictable but it doesn't change the after effect of watching it. It easily slides into place with the few other movies I can say are true haunted house films.

Memory of the Dead