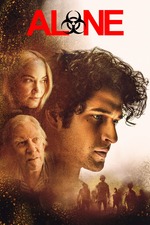 Having been released almost immediately after the Korean version was released to almost anyone in the world through Netflix, it's hard not to compare the two films constantly. Most of the film in its construct is exactly the same as the Korean one, but it's glaringly cheaper here, feeling almost like the level of a Canadian made for television film. Either that, or the director here just didn't know how to make it feel as slick or as big as the other one. The makeup effects are certainly less impressive, looking like quickie applications in a tired way. Even though most of the film feels diminished in comparison to its bigger, more polished counterpart, it still works at a fundamental level. Posey plays his part earnestly, and there's an attempt to add more characterization to everyone, including Sutherland's role who gets a ton more pathos here than the horror-show version in the other. The final third is changed enough to take a few different paths and make it slightly more worth spending the time with it, though it's most likely from being saddled with a smaller bag of funds rather than out of creative liberties.