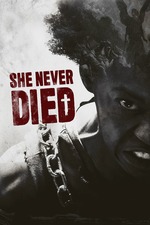 Feels surprisingly low-key for all the violence that occurs. It moves through the plot at a pretty even keeled pace, hitting its points smoothly with a wonderful subdued sense of humor. Adeliyi is fantastic in the smallest of ways, bringing out such personality even as she plays it with as little as possible. The overall plot feels kind of like The Crow, oddly, but placed within this kooky world that originated in the first film. This provides a great counterbalance to earlier film, with Adeliyi nicely playing a version that's like the other side of the coin of Rollins's take, and I'm not gonna lie, all the cliffhanger stuff at the very end has me imagining if they could happen to make another film and bring back Rollins because seeing the two of them play off each other would be fantastic.

A Werewolf in England