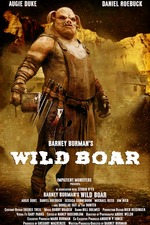 A big ol' slice of imaginative insanity. Maybe the best way to describe it is it's like Adventures in Dino City for perverted adults but with pig-men instead of dinosaurs. And that's probably a sentence I never thought I'd say. It takes a while to get to said pig-men, but I honestly didn't mind it. I enjoyed the characters and their banter, something that's usually a time-waste in films like this. They had charisma and odd quirks that made them seem likeable even in their asshole moments. Roebuck in particular balances a fine wire act of being a smarmy dick while also not putting you off of him at the same time. Even the usually throwaway role of the secondary woman character here becomes a featured role and is given a take charge and tough attitude that really shines in the second half. The makeup effects in particular are worth checking out, with the pig-men showcasing wonderful old-fashioned suits and applications that completely sell themselves and the weird fucking world they inhabit. It truly may be the most impressive makeup work this year from any of the small indie flicks. The only area where the film takes a hit is when many of the characters are lost, causing the film to lose a lot of the jovial fun it had worked up, even though Augie Duke holds the film down quite well anyways, and the sequence immediately after that is made up of mostly just being cooped up in cages in tight shots and we're not really given much to work with until that whole bit is over. It also has some camerawork and editing that feels a little too choppy and handheld at times, but it at least lends it some of the DIY shot on video feel that goes along with its freewheeling and looney tunes tone to it all. In a time when I bemoan the repetitive sameness of the legions of VOD flicks I make myself watch, I will happily sign up for films as unique and gonzo as this one.