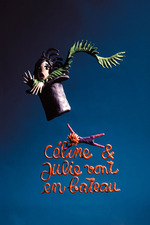 2nd Jacques Rivette (after The Story of Marie and Julien)

Wild and wooly in the best possible way, Céline and Julie... needs you to take your time watching it. It's more than three hours, and it doesn't seem like, for the first hour at least, that anything will happen. It's a lot of talking and playacting apparently about nothing at all. But gradually, slowly, things begin to snowball, and by the time you're two hours, the momentum is overwhelming and you're kept spellbound until the final scene rolls. One of Rivette and co.'s masterstroke is to space out all the narrative events very deliberately, allowing the interactions between characters to unspool at a relaxed pace. It's because you're distracted by the wordplay and storytelling that Rivette is able to gradually accumulate all the little pieces and put them together without you noticing. It's a classic art of misdirection, something that doesn't seem unconscious considering the subject matter.

Rivette collaborated on the script with the main cast, giving the film its loose, improvisational quality. It also allows for the women to take centre stage through Rivette allowing them to dictate their characters and interactions, making the film unusually feminist for its time and milieu; Rohmer and the rest of the New Wave gang can't be given such a compliment. It's also interesting to see how Céline and Julie... has influenced films and Tv since. Obviously Desperately Seeking Susan, which the director has acknowledged more than once, but also Twin Peaks. The mysterious house and those within it feel close to the Black Lodge, both sites of ghosts trapped by trauma of some description. Yet it's unsurprising how influential Céline and Julie can be when you think of how many different ideas and elements are all in play- it's a queer film, a horror film, a comedy and a puzzle all rolled in one, and in the hands of anyone else it would fall apart, but not Rivette. He brings it all together brilliantly, and as a result Céline and Julie is an utter masterwork. Highly recommended.

(Apologies for the length of the review, had a lot to say about this film)

1. Céline and Julie Go Boating
2. The Story of Marie and Julien