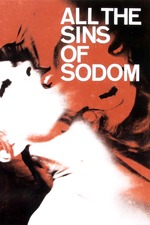 All the Sins of Sodom

I read a wonderful interview with the great Hisayasu Satô, and this quote in particular stood out to me: "Some audiences only see the exterior of a film. And then there are others who appreciate a movie because they see something behind it... something hidden or suggested. These are the people who can comprehend the inner core of the film, see hidden things and get a lock on what has only been suggested. These are the fans of cinema."

this quote has almost become my base and root in how I want to not only interpret but truly FEEL the films I watch. I have decided to stop caring about the acting, about the technical qualities of film (although still very much appreciate them), but rather to focus on the inner workings of characters, feeling their emotions, feeling the emotions of the places I see, the emotions of the entire moving and swirling world throughout the movie.

if we're talking about technical talent, this film doesn't really stand out. the actors seem stilted and disconnected from the scenes they're in (with a few exceptions, both actor-wise and scene-wise, most notably Sue Akers, who played Joyce). the best compliment I could truly give it is that most of the framing is magnificent, and the lighting at times is fucking perfect.

however if you try to look beneath the surface, look below the acting and framing and lighting, and really try to put yourself in the inner core of the film, as Satô would put it, so much more lives there. Joyce very well may be the literal daughter of Satan. she exudes evil as well as lust, she is not just a seductress but an enchantress. she knew from the beginning she would break Henning's heart, although she couldn't do it romantically. she learned exactly how to get to him and how to hurt him. seeing her learn his intricacies and destroy him completely deeply compelled me to keep watching and I couldn't look away.

in some ways, a magnificent film.

P.S. : I would be ridiculously surprised if this wasn't an influence on Refn's The Neon Demon (2016).

Tales from the Darkside: The Movie