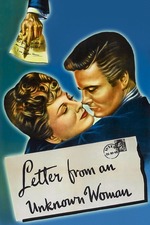 Regality, melancholy, and the bittersweet ichor of pursuit that removes one from honest relationships. This is my favorite story by Stefan Zweig. Every time they added a flourish or took the liberty to add something that was never in the story I flinched and eventually smiled. A good sign for any fanboy.

The light and shadow work is lovely and reminded me of Vincente Minelli's The Bad and the Beautiful, Meet Me in St. Louis, and The Cabin in the Sky. Harsh lighting from the front gives strong shadow projection in the white walls and gray street corners. Slightly dimmer lighting on the sides of the sets cast shadows on the central walls and staircases allowing you to view an extra layer between everything. Much like reading between the lines in a story. Especially a Stefan Zweig story that typically lacks the ease of right and wrong or black and white reasoning everything is a blend of gray ethics and moral.

Joan Fontaine was a livewire of emotion and commitment to character in the story. They didn't start out with her as young as she was in the story. But that would have been risky territory in the 40's to depict the sexual pursuit or longings of twelve year old. Be it a girl or boy.

You Were Never Really Here