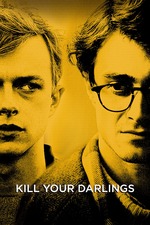 Modern music wasn’t the right selection in many cases— could have done better with something like John Maus
Mistreatment of WW2 b-plot was almost offensive— 2 other directions could have been more effectively taken: 1) the college kids’ ignorance could have been played up as criticism (in that case, don’t have the last scene be that classic radio bit— or at least have the characters react indifferently to it) OR 2) play up the political differences b/w the Beats— everyone knows Ginsberg was a commie and Kerouac was a Republican— have some fun with it!
There was really nothing “fruitful” in any other b-plot (Antisemitism against Ginsberg, Ginsberg’s homosexuality, Kerouac’s tumultuous marriage, etc.)
Overall, it was nice to watch because I like that era, those stories, those poems, etc. Well-cast, for sure. I was just hoping for a bit more of a “POW!”, you know? The movie should have felt like how reading the Beats feels. Yet, through all of the films I’ve watched about them so far, I’m starting to get the feeling that that may not be possible.