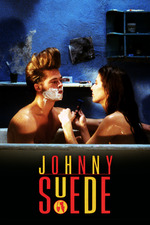 Oh boy, how do I rate this? Has the off-kilter reality of Jarmusch and the unassuming cool of fresh ideas. A heavy amount of country guitar to make you wanna tap your blue suede shoes. Quite possibly in an Americana post-apocalyptic New York (though never fully established, but carries a Dark Backward sensibility): street trash, molesters, beggars, and rats squander through dilipated streets graffitied by war. Brad Pitt rocks a giant pompadour envisioning himself a beacon of a bygone era -- an almost dreamy theme park of souvenir-stand iconography and kitsch early nineties superimposition. In trying to rise to fame (including an idealized rockabilly Nick Cave and standup bass playing Samuel L Jackson) Pitt finds himself entangled in bad romances that feel all too real even amongst the soap opera delivery. This isn't a good movie, but one that tickles my fancy. It has the soul of a small production, the charm of its actors on display, and subtle humor denoting reality within the paradigm of the absurd. Not so much a film as a triumph of indie filmmaking and the magic of original ideas.