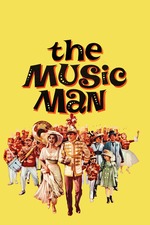 The Music Man has always held a special place in my heart. It was the first musical I was ever in -- I played Winthrop in a school production when I was 9 -- and as I've gotten older, I haven't lost any of my affection for the score or the story. When I was in the show (almost twenty years ago, omfg), I somewhat obsessively rewatched the 2003 TV movie adaptation with Matthew Broderick and Kristin Chenoweth, but I sort of ignored the original film. I'm pretty sure I sat through it at least once (for some reason the "Lida Rose" and "Will I Ever Tell You" sequence is burned into my brain), but this was my first time attempting it since.

It holds up well, I think! Other than an odd joke at the beginning, the script mercifully ignores racism-as-a-punchline, and while so much of the fabric of The Music Man has been recycled and parodied ad nauseum over the last sixty years, the show still works. Meredith Willson made one of the most astonishing debuts in musical theatre history with this, acting as composer, lyricist, and librettist. The intelligence and unassuming complexity in his work is staggering to think about. Never mind "Rock Island" being the dinosaur-age ancestor of modern hip-hop in musical theatre (if you subscribe to that theory, at least), just the fact that songs like "Ya Got Trouble" and "The Piano Lesson" and "The Sadder-But-Wiser Girl" carry a relaxed assuredness in their intricacy and humor and character development is kind of astonishing. Plus the musical parallels between "Seventy-Six Trombones" and "Goodnight, My Someone"? Magnificent.

Robert Preston's firecracker performance as Harold Hill is preserved beautifully here, joining the ranks of other Broadway leading men who got the chance to reprise their roles onscreen (Rex Harrison, Zero Mostel, Robert Morse, William Daniels). Shirley Jones is a fine Marian, although I certainly would have been thrilled to get Barbara Cook's performance preserved alongside Preston. The supporting cast is charming -- the young Ron Howard enthusiastically screams around the pitch on his songs, and Pert Kelton's Mrs. Paroo is the most lovable Irish widow on the block -- but Hermione Gingold threatens to run away with the whole damn movie as the mayor's wife, Eulalie Mackechnie Shinn. Her bone dry line deliveries have seldom been more acidic and more hilarious.

Morton DaCosta, who also directed the stage production, opens the show up handsomely. Some odd directorial choices prevent me from fully loving the adaptation (those blackouts??), and the film does drag just a bit near the end. Also, I'll always be annoyed that "My White Knight" was inexplicably cut.

But the scene at the end where the boys are finally playing their instruments for the townspeople is the heart of the show. They're bad, and Harold knows it, and I'm sure the boys know it too. Their families don't care, though, as one by one the citizens of River City start shrieking about how proud they are of their children. Harold conned the people of River City, but in doing so, he opened them up to a new way of being, to a more authentic way of living and loving each other. Seeing the characters beam with pride as their sons play this hideous music is hilarious, but it also gets me really choked up. After all, my dad is a band director.