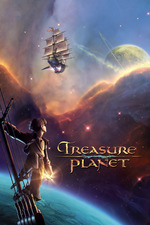 Treasure Planet is one of the most notorious financial disasters in Disney's history and one of their most fascinating artistic experiments in the post-Renaissance era. A far cry from a Disney princess movie, this is a male-centric story with not a love interest in sight (for our protagonist, at least). It's definitely not a musical, too, with just one mid-story song that plays over a montage ("I'm Still Here," which seems to have amassed some level of a cult following). However, with its striking visuals and star-studded cast, it feels cut from the same cloth as the likes of Aladdin and The Lion King as a classic hero's journey packaged inside a clever adaptation.

Having not read Treasure Island, I found most of the choices in adapting the story compelling and fun. Jim is an endearing protagonist (voiced by Joseph Gordon-Levitt!), and I'm always down for Emma Thompson in anything. The script is a bit clunky, though, with some characteristically flat attempts at humor and a forced romance between two of supporting characters. Still, it's fairly short, it's fairly smart, and it has great visuals and a rollicking score from James Newton Howard. There are far worse options on Disney+.