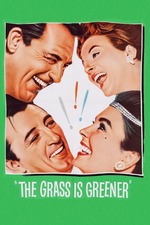 The Grass is Greener feels like a stagy 1930s comedy of manners (and affairs) without any of the participants having the requisite chemistry. The film is a misfire for all involved, made all the more significant given its cast and director. Mitchum is probably miscast, Simmons is flighty, Kerr stays snooty and patrician and Grant is probably left wondering why he wasn't cast in the Mitchum part.

Tonally, it flits between comedy and melodrama before eventually leaning towards the former. There is a much better film found in this material and that is the avenue that the film initially appears to be trekking down in which English aristocrats are forced to provide guided tours of their historic homes. But instead of having Mitchum's rich American decide to buy the place and inserting some commentary on the decline of the British aristocracy, we end up with a love triangle film that thinks it is more sophisticated than it actually is.