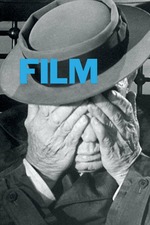 Film is Beckett's and Schneider's notorious venture into the world of cinema, disguised as an an avant-garde project, but it is more experimental in its narrative and aesthetics without being fully abstract. We begin with an escape sequence from a surrounding city in ruins where a man does not want to be perceived, therefore trying to neglect the current circumstances of his existence. The idea of being perceived as axiomatically relevant for existing is not only absurd; it is alarming. In some ways, this strange, wondering man has bought that motto through isolation, which has led to frustration and a desperate attempt to keep all living and even inert things out of their "visual" reach, even animals. Memories must be destroyed, even if memories are images, but the most terrifying ghost, even that of the past, is the ghost of the present. You don't stop being, and because you are, there is someone perceiving you: yourself.

Outstanding achievement, visually disorienting and yet coldly calculated in how it rocks back and forth, left and right, causing disorientation as a tool to represent the inner state of the character.

For the record, M. Bianciardi's score correlates magnificently with the inner turmoil at hand!