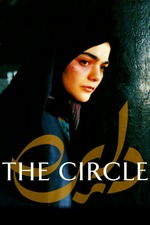 Simultaneous to Marziyeh Meshkini's symbolic masterpiece The Day I Became a Woman (2000), Panahi applies his trademark, engrossing style of striking realism, lively urban environments and hypnotic tracking shots to direct this furious denunciation against gender inequalities against women in contemporary Iran, a society that prevents women from having an abortion, that prevents them from making a shocking amount of formalities without police authorization, that forbids them to travel without male company, that makes women endure physical, psychological and domestic violence, that forbids them to accept car rides from men and to buy tickets alone, and that makes them endure unfair marital regulations that ultimately increase paternalistic and chauvinist tendencies inside the families and empowers men to legally ask for a divorce for inhuman reasons.

Dayereh is credited with having the narrative structure of Max Ophüls' La Ronde (1950), given that, as literally suggested by the title, the film comes full circle. Besides, all of the events are interconnected, similarly to Meshkini's testament, but instead of being separated vignettes, they are connected in real time in the lapse of one single day. Perhaps this is a way to state that these kinds of injustice can be seen "everywhere you turn your head".

Panahi scores again with his most straightforward commentary directed for worldwide masses, especially aimed at similarly sexist and oppressive societies around the world... And with the abandoned little girl featured in this film, we might just have a reason of why Mina's mother in The Mirror (1997) never came to pick her daughter from school...