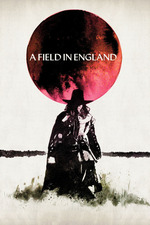 A Field in England

Positively one of the most well shot and well directed films I've seen in a long time, communicating a sense of insanity and surrealism within every single scene. It's almost as if Tarkovsky returned from the dead to possess Wheatley's body and direct an English black comedy in 2013, but not quite, because the cinematographic feel is, just... different - many more close up shots, greater attention to detail and less visual metaphor, but it was, at least for me, somewhat reminiscent of the great late Russian master (the use of fog, blowing wind, and so on).

You'd think a film this unearthly and dreamlike would carry a rather serious tone throughout, but A Field in England is anything but. It's hilarious. I would go from scratching my head to gasping at the visuals to laughing hysterically, and then back to scratching my head. LIKE SERIOUSLY HOW ABOUT THAT SHOT OF THE CATERPILLAR CRAWLING INTO THE SUN. HOW DOES ONE ACHIEVE SUCH BEAUTY!?! If this film has been on your watch-list for sometime, like I had been for me, I urge you to skip the rest of the films on your queue and delve into this immediately... please, please, please don't make the same mistake as I did by waiting so long to see it.

Sincere thanks to Boonmee for convincing me to give this a go.

On the other hand, I'm only directing this advice to the non-narrative cinema lover, because you're not going to be able to find any linearity or coherence in this picture (though I have a hunch that the main themes within this film deal more with masculinity/power struggle than anything else). From what I've seen, this is Wheatley's strongest film, and in my honest opinion, it's a visually and aurally driven masterpiece worthy of great praise, and unworthy the condemnation that it has received since its release. Color me thoroughly impressed.