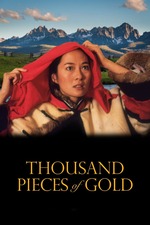 saw the recently restored version at bam as my first back in theaters and it was electric. i missed the inflections of crunchy popcorn and soft giggles.

the landscape shots were stunning with the hazy idaho blue skies cut by sharp peaks.

rosalind chao’s single dimple had me charmed. her high kick to the jaw was the deal sealer.

with every man the protagonist Lalu encounters, she is either property, whore, or (unreciprocated) love interest. and fundamentally she can assume no other social form. thus the lesser of evils, the slurping of “forgiveness soup” (?) must ensue.

not a perfect film. very much rusted by 90s multiculturalism. a lot glossed over in regard to “manifest destiny” and the violence towards the female body. but also i very much enjoyed seeing it for what it is and applying my own temporal analysis to it.

also, perhaps a deep cut, but i relished that the german sex worker is played the same actress as aunt zelda from sabrina the teenage witch