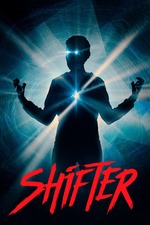 This was described in the film guide as a time-travel horror film.

It's quite that, and conceptually with talking to the cast and crew, it's the starting view point that they came in with. There's certainly a lot of love in this film, and it's probably the first time at the festival, where I felt for sure, that I was going to rewatch a film at some point. The time-travel aspect is interesting and it doesn't really spend a lot of time with the mechanics or getting entwined in that aspect of the plot, instead it uses it as a ignition for the Croenenberg-esque body horror that it results. Far more interested in the terrifying aspects of having your body torn apart and put together as an individual is displaced in time and the physical, psychological, and social repercussions of tempting fate.

Frankly, the characters are serviceable, as our lead is fighting the demons of her past and struggling with her position in life and what she will become, her whole character is interestingly wrapped up in the past, stuck in the past of her own insecurities, that this is time travel device is her escape. She only realizes too late the cost. It's effects and story are serviceable, and the characters are familiar and homey for the reason that they wanted to zero in on the horror rather than the plot.