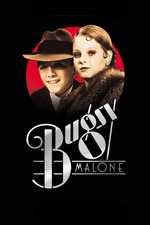 I first saw Bugsy Malone in 5th grade during one of those lazy days where the teacher pops in a movie and calls it a class. It blew my mind. A film with NO grownups? A musical I liked? KIDS WITH PIE GUNS?!?!?! It was an absolute blast.

Over a decade later and I have all those same feelings rushing back to me. Not only is the energy infectious, I remember EVERY DAMN SONG and WAIT A GOD DAMN SECOND TALULIAH WAS JODIE FOSTER?!?!?

Bugsy Malone feels like a film made imagined by a group of 3rd graders during recess, and that's why it's one of the greatest children movies ever made.

I mean the film ends with a gang war between a group of children that doubles as a giant food fight with pies where EVERYONE DIES and in the afterlife, they sing a song about how they maybe should've been good guys after all. The two unsullied survivors of the war are dressed in all white and escape to Hollywood in a car that doubles as a bicycle because, just to remind you, they're fucking children. How did this NOT win the Palme D'or????

Hedwig and the Angry Inch

The Umbrellas of Cherbourg