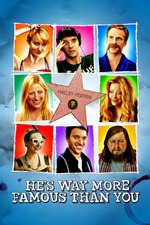 He's Way More Famous Than You

¨I was in the biggest indie of the last century¨

This is one of the few movies that I couldn’t finish because it was just terrible. I felt like if I watched it any longer I was being a masochist. This movie was intolerable for me and after sitting through 40 minutes I had to walk out because I felt it was really pointless. It was just not my kind of film and I doubt it will find a wide audience because the film doesn’t really work as a comedy or as a satire on the film industry. There is nothing fresh or innovative about this film, and the main character played by Halley Feiffer is just awful. Feiffer plays her role way over the top even for a satire, and she is a complete train wreck here. It was the role she was supposed to play, but I really couldn’t stand watching someone like that for over an hour. I have no idea how the movie ends or if it gets any better, but I really could care less because in my opinion this is the worst film I`ve seen in a while; completely pointless. The film was written by Feiffer herself, and directed by Michael Urie, who actually plays the director in this film as well. Urie is known for his supporting role in the Ugly Betty series, and they constantly remind us of it in this film. There are several cameo appearances of actors playing themselves as well, but the lead characters are Halley Feiffer, Ryan Spahn, and Michael Urie.

This is just an insane movie about the film industry and a satire on how some of these celebs become so addicted to drugs and alcohol that they just seem to lose touch with reality. Everything is taken to such an extreme that the entire movie felt like a complete mess. The film opens with Feiffer playing herself as she is experiencing some sort of success after having a minor role in the somewhat successful indie film, The Squid and the Whale. Five years later she becomes an alcoholic who can`t find a job in the industry and therefore decides to write a movie with her brother, Ryan (Ryan Spahn), about her own life. After her boyfriend breaks up with her she decides to star in her own film with Ryan and convinces him to ask his boyfriend, Michael Urie to direct it. Urie decides to help only to please his boyfriend, but everything about the film is a complete mess. Somehow they manage to get some celebrities to help out, but Feiffer`s behavior just makes Urie`s job intolerable. She also makes this film intolerable and therefore I couldn’t finish it and would advise anyone to stay far away from this film as possible.