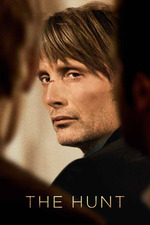 Danish director, Thomas Vinterberg (The Celebration), delivers a powerful and emotionally draining drama that will leave audiences hooked and feeling enraged for what Mads Mikelssen's character goes through in his closely-knit community. It's a film that will resonate with you and stay on your mind long after it's over. Building on Mikelssen's powerful and engaging performance this is a thrilling psycho-social drama that studies the mob mentality very closely while showing us how a lie that's been accepted takes on a life of its own destroying innocent lives in the process. That is what makes this film so infuriating and despite not having any action it builds a lot of mental pressure on the viewer. The Hunt was my favorite foreign film of 2013 and Mikelssen delivered one of my favorite performances of the year (he won the Best Actor Award at Cannes for this role). His character is very restrained at times, but his facial expressions are very expressive. The church scene was one of the most powerful and emotionally draining scenes I've seen all year. This may be a difficult film to watch at times, and the tension can be overwhelming, but this psychological thriller is a must see.

Lucas (Mads Mikkelsen) is a former teacher who is recovering from a difficult divorce and battling over his son's custody. He lives in a small community where everyone has friends in common. Lucas spends a lot of time with his closest friend, Theo (Thomas Bo Larsen), while currently working at a daycare. The film opens with a lot of laughter between Lucas and his friends first and between Lucas and the children who adore him at the daycare, but this friendly community changes when one of the little girls named Klara (Anika Wedderkopp) accuses him of sexual abuse. This innocent little lie begins to grow as the community reacts with hysteria and accuses him without having any other proof than what this little girl said. The only reasoning being that clearly a girl wouldn't lie about something like this. Lucas's life is shattered and his reputation has been stained forever despite the law finding him innocent. The little lie affects everyone around Lucas including his son Marcus (Lasse Fogelstrom) and his girlfriend Nadja (Alexandra Rapaport). The damage has been done.

This social study about people giving in to hysteria was co-written by Thomas Vinterberg and Tobias Lindholm. It's a modern witch hunt tale while at the same time a character study of an innocent man that suffers from his community's harsh judgement. While watching this film one can't help but recall the Cosby series, Kids Say the Darndest Things, because it's exactly what you think when this young girl accuses this man. It's an unsettling and difficult story about a persecuted man which reminds us all that even though you may have won a legal battle, the social effects remain, especially if you live in a small community. The last film that infuriated me like this was In the Name of the Father, and in that film the story only focuses on the legal aspect, imagine the ordeal the main character still had to go through to clear his name from the people who are still second guessing and judging you. A legal victory seems something to cheer for, but The Hunt reminds us that the most difficult jury is the society and community we live in, and their minds aren't easily overturned once they have decided on something. This is simply a powerful and enraging drama that reminds us how judgmental we tend to be towards others.