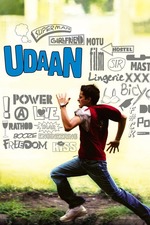 ¨Freedom can never be asked for. Seize it and live forever free.¨

Udaan is an Indian film directed by Vikramaditya Motwane which was nominated for the 2010 Cannes Film Festival for the Un Certain Regard Award. Even though it didn't win, I have to admit that the film was pretty strong and had a lot of soul put into it by first time feature film director Motwane. The story isn't original, we've seen the premise before, but the way it is presented and the performances from the unknown actors are what makes the film feel real and authentic. My only complaint might be that the film is a little too long and drags at times, but it still is a very entertaining watch with several emotional moments throughout the movie. I loved the performances in this film especially the one of the seventeen year old son played by Rajat Barmecha and his estranged and abusive father, Ronit Roy. Aayan Boradia, the six year old brother, was also a charm and despite not having much dialogue he steals your heart in every scene. This is a strong and emotional film about family and finding the courage to follow your dreams. Some scenes may seem like taken out of a Disney movie where you have the abusive father who wants to force his kid to work in the family business and neglect his personal dream or goal of becoming an artist (in this case a writer). The characters in this film have a lot of depth, but at the same time they are one dimensional sometimes. The father is abusive, mean, and disciplines his children like if they were in the military by making them call him ¨sir.¨ He shows no love for neither of his sons. Despite the story being familiar and cliché, I still found it very touching and powerful thanks to some great performances and a good soundtrack. Udaan was a very interesting film and I absolutely recommend it.

The film begins with four friends escaping one night from a boarding school to go watch an adult movie at the cinema. Once they are at the movies they have the bad fortune of running into the school guardian who informs the principle about their misconduct. Rohan Singh (Rajat Barmecha) and his friends are expelled from school. Rohan is forced to return to his hometown in an industrial part of India where his estranged father lives. Rohan hadn't seen his father since his mother died and he was sent to the school over eight years ago. His father, Bhairav (Ronit Roy) never visited him during that period and only wrote to him one letter a year. Bhairav is very displeased with Rohan's behavior and forces him to work at the steel industry that he manages and study engineering. Rohan wants to go to art school and become a writer, but his father is determined he study engineering and abandon his silly dreams. Rohan also discovers for the first time that he has a six year old brother named Arjun (Aayan Boradia) who obeys every word coming from his father. The only person who seems to treat Rohan well is his uncle, Jimmy (Ram Kapoor), who unsuccessfully tries to convince Bhairav to let his son become a writer. Rohan feels imprisoned at home and can't find the way to pursue his own dreams. He finds refugee some nights by escaping from his home and hanging out with his friends, but he also begins to worry about his little brother and the way his father treats them.

If I would've just read the premise of the story I would've probably thought the movie was going to be cliché and predictable, which in a way it is, but it's still worth the watch because of the emotional drama that is poured into the film. It has a lot of heart and some terrific performances from Ronit Roy as the mean spirited and strict father and Rajat Barmecha as the son who feels abandoned by his father and locked in a cage without being able to pursue his own dreams. You can't help but feel sorry for him knowing that he has a special talent but can't do anything about it due to his father's stubbornness. There is no good in Roy's character, it's as if he has no love in him and wants to force everyone to be like him. He is a tyrant and is good at it. The film is entertaining and worth the watch thanks to these performances and the emotional moments that transcend the big screen. Udaan is a great social drama that many will enjoy.