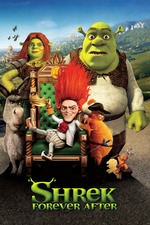 After Shrek the Third failed to live up to any of the hype, I completely skipped the fourth film. I sort of wish I hadn't now, because it's a much more entertaining end to the series. The central plot keeps you easily invested, going to an alternate universe that allows the film to be really creative with its storytelling. By forcing the characters back to square one, we get clever new ways for them to interact and grow together again. Shrek and Fiona are one of the most consistently engaging central couples, definitely in animation, but I think they fare well against anyone. This film again has them pushing back against one another, talking to one another, accepting responsibility. It's nothing spectacular, but the moments of emotion for the most part feel authentic. I never thought you could be this charmed by an ogre romance sequence, but dammit it just works.

I'll admit, it's a bit lacklustre in comparison to the first two. Comedy is definitely not its strong suit, with a bunch of gags that really fall flat - this may even have less laughs than Shrek the Third. As a pure fantasy adventure though, it remains enjoyable. The action is particularly impressive in the final third. Rumplestiltskin is a welcome addition as the conniving, self-absorbed villain, and they make the wise choice of not bringing back any of the dreary side characters from the last film. Even the animation is impressive. I'm glad to see the series ended on a slight up-note, even I am over a decade too late to the party.