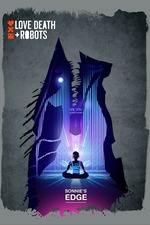 when I heard Netflix was doing an animated adult sci-fi anthology I was incredibly hyped! went into this first episode expecting to love it... but fifteen minutes later, I was left not only unconvinced, but doubtful that I'll be watching any more of the series.

my sincere apologies to those who did in fact love it, but I was personally repulsed by the superficial, badly written, highly misogynistic dystopian vision on display here. despite a surface-level impulse to disguise itself as a feminist critique of patriarchal institutions, the episode remains rooted in blatantly sexist tropes with its decidedly male gaze, disturbing depictions of sexual violence, and troubling exploitation of gang rape as a plot device. any agency and triumph on the part of the female characters is undermined by their reductive rendering as clichéd cardboard cutouts with disposable bodies subjected to excessively grotesque bodily horror, whose "success" is to become an active participant in the same culture of appalling brutality that's imposed on them by men. I just don't see much substance of value here, and the substance that's present is disappointingly problematic.

still open to giving the rest of the series a chance (I so badly want to cheer on the use of animation as a medium for mature storytelling 😩), but based on my experience with this one, I'm no longer in a hurry :/