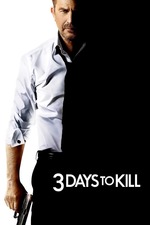 While 3 Days to Kill is undeniably a bad movie, it is at least easy to laugh along with while you watch. It includes just about every trope in the book in its completely generic story. Costner plays Ethan Renner, an aging agent diagnosed with a terminal illness who just wants to walk away from the life and repair his relationship with his estranged wife and daughter. Of course, the threat that the Wolf (Richard Sammel) and the Albino (Tomas Lemarquis) pose to the world make this impossible, and he can't say no when Vivi (Amber Heard) offers him a secret cure for his disease in exchange for stopping them.

We get a weird race against the clock in which Ethan attempts to stop the bad guys and win over his family in nearly equal measure. The mixture winds up making the whole thing feel like a sitcom in ways that are kind of amusing. Will Ethan make it home in time to soak the fish in milk for supper or will he let his family down again? Will he get his roughly 20 year old daughter to accept the purple bicycle he bought her to make amends or will it get ruined when he is forced to ride it in pursuit of the villains?

At least it seems self aware enough about what it's doing to be fun. The recurring joke of the ring tone his daughter gives him being in complete contrast to some of the situations he finds himself in is a solid gag. I've now dedicated too much time to this movie, so I'll end here by saying it will give you some laughs but not too much else.