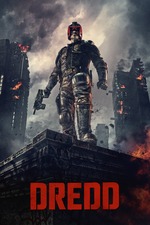 too style over substance to leave a mark, too dark to be any fun, and too synthetic to invoke sympathy for any of its characters - dredd isnt a bad movie - it just feels ten times removed from its audience.

dredd drags itself from scene to scene with a dreariness that heightens its disconnected narrative beats, but none of them last long enough to make an impact - resulting in a final product so unsatisfactorily average it becomes upsetting, meshed together with glittering, flashy slow-motion violence (very à la suicide squad).

how does a movie with such a fascinating premise end up so bland? if i had to hazard a guess: probably because garland has a history of writing up gripping characters and then not knowing what to do with them; dredd is no exception. as with sunshine, he also chooses the least interesting of many subjects to be the main character; dredd as a protagonist is infinitely less interesting than rookie judge anderson or villainess mama. it becomes excruciatingly hard to root for dredd himself; especially when the system of judges he is employed by is revealed to be corrupt. his continued indifference to both this and any of the situations he and anderson are stuck in make the stakes feel lower than they should be. none of the life or death circumstances presented feel dangerous; dredd moves from set piece to set piece so linearly it becomes hard to recall what went on in the previous scene.

maybe i would have had a better grasp of character if i had read the comics, as i’ve heard it lasts as contemporary political satirism. as it is, however; the movie dredd (2012) offers up many ideas but then fails to deliver - the end result is painfully borderline.

The Wolf of Snow Hollow