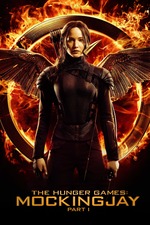 Though filler episode it undoubtedly was, Mockingjay P1 was more than supplementary in both heart and direction.

Mockingjay P1 boasts a stellar, award-winning cast; fan-favourite Jennifer Lawrence shines, as per usual, and newcomers to the series Julianne Moore and Natalie Dormer show their dedication to their roles - but let's face it, A-list actresses like them could have produced a solid performance in their sleep. There was nothing terrifically spectacular about their conduct. (Not that it didn't require effort on their part, of course.)

Let's be frank here, I've read the books. My entire life I've been loaded with adaptations of popular book series, from billion-dollar successes (Harry Potter, Narnia, LOTR) to large-scale failures (Inkheart, Golden Compass, every single YA dystopian romance drama ever). I know how difficult it is to pass off a movie adaptation. There are scenes, undoubtedly important, that you just cannot make, either because of budget restrictions, or in order to keep the film PG-rated, or because the actors have limitations, or because they simply cannot be done. There are moments that have no way to be portrayed onscreen. Or worse, there are moments that can be portrayed onscreen, but only in a different context, destroying their intended purpose. There's nothing worse than a director who doesn't understand the book. Fortunately, that's a crime Francis Lawrence does not commit. If anything, Francis Lawrence definitely knows what the Hunger Games is about.

I could write a novel on how brilliantly concise Francis Lawrence's direction is, both in Catching Fire and Mockingjay P1, but the essence of why it works is simple: he borrows what the book lends to him, and instead of destructing its core, he builds on it, always taking from the book but never so much as to completely rely on it.

Mockingjay, despite being approximately around the same length as the first two novels, was without a doubt the most difficult to adapt to screen. Its tense, political atmosphere, plus the distinct absence of most of the action sequences that appear almost constantly in the first two novels, makes for a very different genre of film altogether, and certainly not one intended for a box office blockbuster. Lawrence, however, handles the transition with ease, filling action-less scenes with emotion and knowing just how to work the camera to make the tension and destruction ripe and ominously apparent. His work alone prepares an originally politically-rife, documentary-like book for a blockbuster-expecting, popcorn-munching audience, without having to pull a Prince Caspian and add in fight sequences that do not originally exist, just to entertain those watching.

Despite all this, I have to admit that as the final scenes of Mockingjay P1 rounded to a close, I was left with that dry, unsatisfactory feeling rolling around at the base of my stomach. My first thought as I vacated the cinema was "was it really necessary to split the movie into two?". If I'm frank with myself I have to admit that many of the scenes could have been trimmed (if not, omitted entirely) without losing the heart and intensity of the film. In fact, it could have actually benefitted the pacing of the movie. I felt none of the anxious, itchy desperation for Mockingjay P2 that I had felt for Deathly Hallows P2 after watching Deathly Hallows P1. While Mockingjay P1 succeeds as a filler, it ultimately fails to incite any anticipation for its next installment.

Despite being an stubbornly unsatisfactory and unnecessary movie, all in all, the miraculous feat of evolving from the action-filled Catching Fire to the politically-coloured Mockingjay, without losing the audience's attention, is alone the reason why Mockingjay resolutely succeeds, overall, as a sound movie and a stunning book adaptation.

Step Up All In