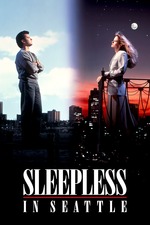 It seemed fitting to visit Nora Ephron’s Sleepless in Seattle after seeing Leo McCarey’s An Affair to Remember, as though its characters consciously speak of this influence and how many of the film’s female characters have the film part of their DNA, it is in the construction and atmosphere that Ephron moulds for “Sleepless”, the inner magic, the beautiful circumstances, the exploding melodrama, it defies the trends of reality in favour of sentiment and warmth, and for the most part, the film is able to succeed in such regard.

Sleepless in Seattle finds a widower, Sam Baldwin (Tom Hanks), in a state of emotional low, living in Seattle with his son, unable to sleep at night, committed to his work, and distant from social circles, it is a deep mourning that seems to consistently plague him. It is only upon Christmas Eve that his son, Jonah (Ross Malinger), calls a Chicago radio program in order to begin the repairs of his sadness, to advertise to the world his father’s thoughts and feelings, a moment of self-reflection that he has allowed himself to share.

One of the listeners is a recently engaged woman from Baltimore, Annie Reed (Meg Ryan), who finds his story touching, a quality of magic that seems omitted from her current relationship, facilitating a sense of doubt and an act of reflection whether her choice was a result of comfort or true passion. The film would go on to demonstrate how fate, longing, and subconscious affection would bring them together by its end, littering its pathways with barriers and hesitance to amplify the result of their ultimate decisions.

Ephron is a true craftsman of capturing the sentimental heart and the balanced nature of romance and comedy, these were the qualities that were demonstrated in what I still consider to be her best film, When Harry Met Sally, directed by Rob Reiner, who funnily enough appears in this film in a few brief scenes as Sam’s colleague. Ephron allows its characters to constantly be accessible, to portray enough pains and desires to gain a key grounding on who they are, but simple enough that their felt emotions are rather stimuli for our own sentimental heart to be strung along, one that can be perceived as manipulative, but she compensates enough joy and genuine heart to save the film from a complete crumble.

There are plot threads that the film refuses to tightly close, and we begin to ask these questions once the film has ended. It is without a doubt a frustrating aspect upon retrospect, but thankfully Ephron is efficient in making us forget about these things when we sit through them, I doubt such issues would plague my mind when I endure through the spectacular heartwarming of an ending that the film provides. This is a film that carries enough charm and sentiment that it would definitely build an audience, much like the passionate characters in this film towards their most favourite films, but it is one that loses a slice of its impact when we have detached ourselves from it and view it with a more logical lens.

An Affair to Remember