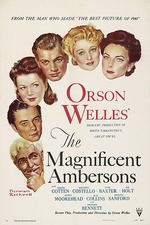 "J'aime le souvenir de ces époques nues" (Baudelaire). There's no nostalgia like a modernist's nostalgia, Orson Welles on the "disappearing miasma" of Midwestern aristocracy is an ornate procession of engravings. The whirlwind of changing fashions (a Cocteau joke given a Keaton spark) launches the preamble, an introduction to 19th-century Indianapolis where a smashed bass viol halts a courtship. (Minnelli picks up on its musicality in Meet Me in St. Louis.) The poet-inventor (Joseph Cotten) and the fragile doyenne (Dolores Costello), separating them is the Oedipal grip of her son (Tim Holt), a willful scion, "princely terror," aspiring yachtsman. The pinched frenzies of the spinster aunt (Agnes Moorehead) and the coquettish serenity of the debutante (Anne Baxter) are vital to the constellation, which flickers and fades on a brat's belated comeuppance. "No times but new times!" After Citizen Kane's shock cuts, the long take that contemplates characters and actors aging onscreen, a persistent mortality. "Ancient recollections" and "onward things" for the Yankee Belle Époque and her stunted heirs, the camera sweeps across the ballroom floor and cranes up the stairway in lambent anticipation of Il Gattopardo. Welles is aware of Our Town paraphernalia, there's an entire world of reflecting display windows on the RKO backlot ("a splendid, humming thing"), he points up the lenses for a mournful Main Street stroll and invents Resnais. Major Amberson (Richard Bennett) holds the Old Guard's gold heart ("I suppose that may account for how heavy it feels nowadays"), he expires before the fireplace in a Rembrandt close-up. "The Man Who Broke the Bank at Monte Carlo" in the sputtering automobile (iris out on snow, fade in on funeral), Indian names in the garden, Mother's last carriage ride. "Life and money both behave like loose quicksilver in a nest of cracks." Welles' masterpiece, truncated torso and all, and the most exquisite of American films—the ultimate testament from a conjurer not yet thirty but already painfully conscious of the difficult art of growing old gracefully.