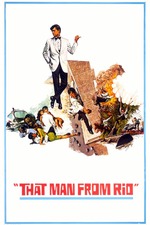 Is there any other movie that does so much with its movie movie trappings to get away with lazy writing? Belmondo just go from one contrived absurd scenario to the next while De Broca keeps winking "hey, it is only a movie!" and somehow the stunt never drags through near two hours. That Man From Rio is a cross between a eurospy, an Indiana Jones film, a cartoon and a surprising adapt use of the more playful side of the nouvelle vague for very mercenary purposes. It uses a very basic boy chases after girl story for a series of elaborate slight of hand and impressive action set pieces. Of course all of the Brazil stuff is ridiculous gringo mystification, but I find most of it rather amusing (the far too picturesque favela out of Black Orpheus is a little too much I confess). Belmondo and Dorleac are as appealing couple as this kind of movie gets (even if her role really is getting rescued and kidnapped time and again). The anything goes logic of the action remains very enjoyable throughout for instance at certain point Belmondo who is flying a plane in hot pursuit of the bad guys without not knowing how to decides landing the plane is too hard so he just jumps off while doing an adorable physical comedy stunt either Lloyd or Keaton would approve. It does loses a little bit of steam near the end because De Broca tourist sightseeing is far more inspired in the Rio and Brasilia sections than in the Amazon one. Above all, this has Belmondo giving one of the great action movie performances, very charming and physical, a silent comedian crossing through a series of increasing absurd scenarios. It is the closest we ever going to get to Jackie Chan starring in a Bond movie.