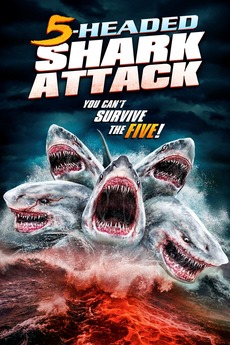 YOU CAN'T SURVIVE THE FIVE!

A beautiful island is home to thousands of species of aquatic life. Now there is a new species: the 5-Headed Shark is all heads and teeth. Shaped like a demented starfish, this monster terrorizes the open ocean before invading the beaches of Puerto Rico, endangering the once peaceful island paradise.