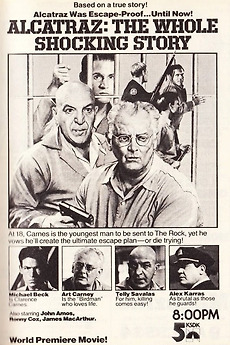 At 18, Carnes is the youngest man to be sent to The Rock, yet he vows he'll create the ultimate escape plan -- or die trying!

Filmed on location at Alcatraz Island, this two-part "whole story" actually concentrates on a handful of the denizens behind the cold grey walls of "The Rock". Michael Beck plays the real-life Clarence Carnes, an Oklahoma Choctaw Indian said to be the youngest man ever incarcerated in the notorious maximum security prison. Serving a 99-year sentence for a gas station holdup and murder, Carnes makes periodic attempts to escape, the final attempt being the most violent. Many of the subordinate characters are fictional (as are most of the details concerning Carnes' escape efforts); the one exception is Robert Stroud, the "Birdman of Alcatraz", here portrayed by Art Carney as a gentle, kindly philosopher. Telly Savalas, a costar of the Burt Lancaster vehicle Birdman of Alcatraz, also guest starred in the 1980 film. Originally titled Alcatraz and Clarence Carnes, this made-for-TV movie wavers between gritty realism and "I'm bustin' outta here!" artifice.

Automatically generated using data from OFDB. Over 400 films are still missing from letterboxd. Here is the complete list, here…

John Irving Bloom, known as Joe Bob Briggs is an American Writer, Comedian, and Television Host that presented movies for…

Everyone loves movies that are based on a true story, because it means you can say things like: "What a…