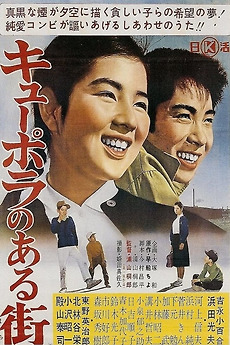 Cupola, Where the Furnaces Glow
JustWatch

Cupola, Where the Furnaces Glow

Set in Kawaguchi in the early 60s, this simple story chronicles the lives of foundry families and one girl's dreams of higher education.

Foundry Town, The Street with the Cupola, Kyûpora no aru machi, CUPOLA

Kinema Junpo is Japan's oldest and premiere cinema magazine. Once a decade they poll Japanese critics to name the best…

Rarefilmm: The Cave of Forgotten Films

All the films listed on Rarefilmm.com

All the films listed on jp-films.com/