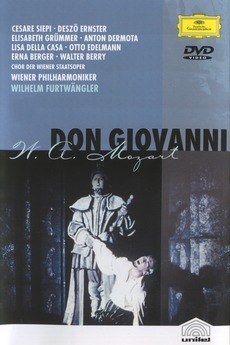 DON GIOVANNI, a young, arrogant, sexually promiscuous nobleman, abuses and outrages everyone else in the cast, until he encounters something he cannot kill, beat up, dodge, or outwit. This legendary production starring Cesare Siepi in the title role with Wilhelm Furtwängler conducting was filmed in Salzburg’s open-air Felsenreitschule theatre during the 1954 Salzburg Festival. Although the production is clearly dated, it remains a must-see for lovers of the opera, both as a historical document of a vintage, all-star production and simply as an excellent way to experience Mozart’s masterpiece.