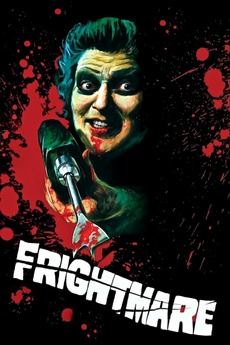 In 1957, Dorothy and Edmund Yates (Keith and Rupert Davies) were committed to an institution for the criminally insane, she for acts of murder and cannibalism and he for covering up her crimes. Fifteen years later, they are pronounced fit for society and released. However, in Dorothy's case the doctors may have jumped the gun a bit. Edmund and eldest daughter, Jackie (Deborah Fairfax), try to discover just how far Mother's bloodlust has taken her. Meanwhile, youngest daughter Debbie (Kim Butcher) begins to explore the crazy roots of her family tree as fully as possible.

Frightmare II, Once Upon a Frightmare, Cover Up