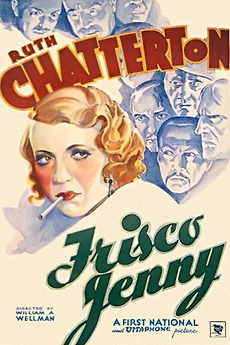 1932 Directed by William A. Wellman

Frisco Jenny was orphaned by the 1906 earthquake and fire and has become the madame of prosperous bawdy house. She puts her son up for adoption and he rises to prominence as district attorney dedicated to closing down such houses. When her underling Dutton proposes killing the DA, she kills the underling and must face execution.

A list of American Pre-Code films. Additional suggestions welcomed, as the list is by no means complete. The top 90…

A necessarily incomplete list of Pre-Code Hollywood movies, inspired by the BFI artcle Pre-Code: Hollywood before the censors.

Pick Me! Pick Me! Films That Should Be In The National Film Registry

While everyone's developing cabin fever from quarantine, you now have time to nominate films for the National Film Registry! Use…

I fell into a very deep depression over the summer. At the height of it, I retreated to my parents'…

Depictions of sex work in narrative and documentary. Not all are positive. Need to be predominantly about sex work/workers.