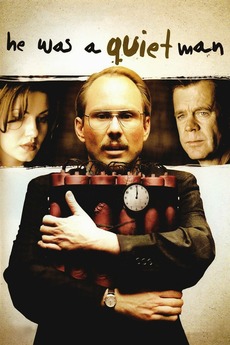 He Was a Quiet Man
JustWatch

He Was a Quiet Man

2007 Directed by Frank A. Cappello

He seemed like such a nice guy.. He pretty much kept to himself...

A troubled loner, Bob Maconel, imagines blowing up the tower in Los Angeles where he works. He takes a revolver to his office intent on killing colleagues, and then himself. At home, he holds conversations with his fish, who encourage him to do it. His supervisor picks on him. As he's screwing his courage to the sticking place, he drops a bullet; while on the floor looking for it, another colleague does exactly what Bob has been planning. Bob emerges a hero and the one colleague he likes, a woman with a bright smile, is severely wounded. Can Bob help her through despair and find himself and joy in life? Or, as everyone says, is this impossible for a man like him?

Indie Movies: The Good, The Bad And The Meh

The term 'independent movie' doesn't mean anything at this point really, and is certainly not a particular genre. Most of…

Update: As many liked this list I decided to updated for the 26th edition of the SXSW film festival. Update…