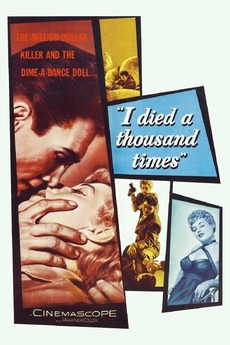 I Died a Thousand Times
JustWatch

I Died a Thousand Times

The Story Behind The Terrifying 60-Day Hunt For Desperado 'Mad-Dog' Earle!

I Died a Thousand Times is essentially a remake of the 1941 crime-drama classic High Sierra. Jack Palance steps into the old Humphrey Bogart role as Roy "Mad Dog" Earle, the ageing bank robber who intends to pull off one last heist before retiring. Sprung from prison by likeable crime boss Big Mac (Lon Chaney Jr.), Earle is commissioned to mastermind the robbery of a resort hotel. His partners in crime include the hotheaded, immature Babe (Lee Marvin) and Red (Earl Holliman), as well as "inside man" Mendoza (Perry Lopez). Also along for the ride is Marie (Shelley Winters), a dance-hall girl whom Babe has picked up. Marie falls in love with Earle, but he has eyes only for Velma (Lori Nelson), the club-footed daughter of a farmer (Ralph Moody) whom Earle had earlier befriended. While the 1955 film cannot match the excellence of its 1941 role model, I Died a Thousand Times works quite well on its own terms.