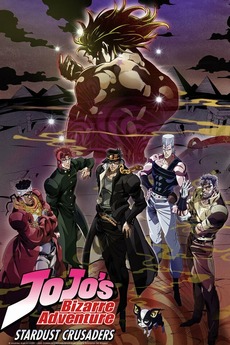 In 1983, DIO, the vampire enemy of Jonathan Joestar which has possessed Jonathan's body, emerges from the bottom of the Atlantic Ocean. As DIO develops a manifestation of life energy known as a Stand, Jonathan's descendants Joseph Joestar, Jotaro Kujo, and Holly Kujo also gain Stands. In 1987, Holly cannot control her Stand and is estimated to have fifty days left to live. Jotaro, Joseph, and fellow Stand users Muhammad Avdol and Noriyaki Kakyoin travel from Japan to Egypt to find and kill DIO, which will free Holly.

The top 100 of the highest rated Anime TV Miniseries on Letterboxd based on the user's average rating. Not allowed:…

When guys turn 20, they chose one of these movies to base their entire personality on

Legend Of The Galactic Heroes

what the title says

Will update when I…