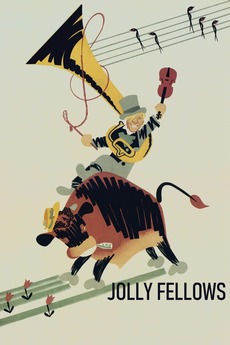 Merry Fellows was the first Soviet musical comedy. Set in Odessa and Moscow in the 1930's. Shepherd Kostya Potekhin (Utyosov) is mistaken for an international concert star. He falls in love with Anyuta (Orlova) and plays the "star" for her. In a cascade of comic musical numbers he becomes the leader of a Jazz-Band and gives a hilarious show at the Odessa Music Hall. Now he is destined to perform at the Bolshoi Theatre in Moscow.

Every movie available at sovietmoviesonline.com, in order from newest addition to oldest - with frequent updates.

Also check out their…

The phantom of the inkwell and the illustrated metaphor: best poster art, 1912-1992

Artists respond to film. Focus is on original, interpretive drawings and paintings with minimal use of photographic images.

NOT INCLUDED: documentaries, shorts, musicals on stage or music…

"This huge list is the result of about six months of work. I began thinking…