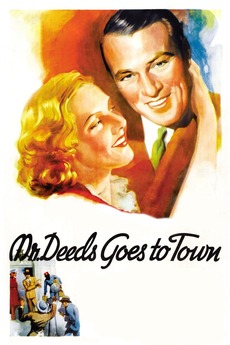 Longfellow Deeds lives in a small town, leading a small town kind of life. When a relative dies and leaves Deeds a fortune, Longfellow moves to the big city where he becomes an instant target for everyone. Deeds outwits them all until Babe Bennett comes along. When small-town boy meets big-city girl anything can, and does, happen.

Found these articles to be interesting.