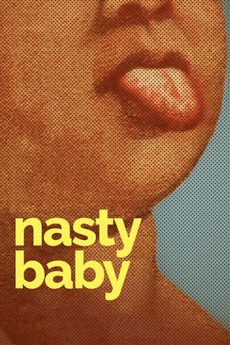 Nasty Baby centers around a Brooklyn couple, Freddy and his boyfriend Mo, who are trying to have a baby with the help of their best friend, Polly. Freddy is an artist, and his latest work is all about babies – it’s clear he’s dying to be a father. Polly is a family practitioner who is more interested in having a baby than having a man. Mo is hesitant about the entire idea, especially when Polly isn’t having success with Freddyʼs sperm and the donor responsibility shifts to him. Set almost entirely in the multicultural vibrancy of Fort Greene, Brooklyn, the trio navigates the idea of creating life, when they are confronted by unexpected harassment from particularly aggressive neighborhood man, nicknamed The Bishop. The Bishop is bothersome in small, yet persistent ways, with a hint of danger. As their clashes become increasingly aggressive, someone is bound to get hurt.