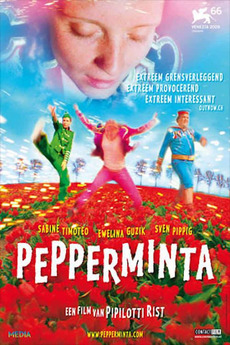 Pepperminta is an anarchist of the imagination. She lives in a futuristic rainbow villa and according to her own rules. Colors are the young woman's best friends and strawberries are her pets. She knows the most amazing remedies to free people of their fears. Pepperminta's wish is for everyone to see the world in her favorite colors. Werwen, a young plump and shy man yet whose sex appeal Pepperminta finds highly attractive, and the beautiful Edna, who talks to tulips, join her on her passionate mission. These three musketeers of a different kind set out to fight for a more humane world. Wherever the gang appears, everything is turned upside down and people's lives are transformed in the most miraculous and wondrous of ways.