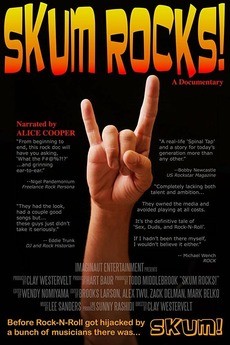 'Play like the music doesn't matter.' The unbelievable true story of the band that gained massive east coast popularity in the late 1980s despite having a complete lack of musical talent and ambition. A powerful PR machine built their fame, and soon their primary objective was to invent new and creative ways to get kicked off stage without actually playing. Narrated by 'Alice Cooper', Skum ROCKS!, is a genre-bending film described by some as a true-life 'This is Spinal Tap', and by others as an independent 'Rock of Ages'. 'Skum Rocks!' chronicles the rise, fall, and return of this infamous band, giving new life to the tale of 'The Emperor's New Clothes'.

Metal Up Your Goddamn Ass: The Most Comprehensive Metal Music List on Letterboxd

Metal is undoubtedly my favourite musical genre of them all- don't get me wrong, I do enjoy literally everything else…