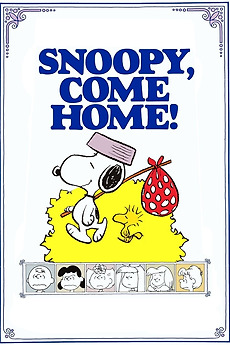 Snoopy travels to see his sick former owner and then feels obliged to return to her permanently.

When Snoopy receives a letter from his original owner Lila, he goes to visit her in the hospital while Charlie Brown and the gang are on the lookout for him. Suddenly, Snoopy feels that he must go live with Lila, but must say goodbye to all his friends. In his adventure to the hospital, he encounters numerous "No Dogs Allowed" signs, an annoying little girl who desires to keep him, and more!

Is There A Fish Tank In That Film?

Quentin Tarantino - love him or hate him. I’m an addicted fan and this ultimate watchlist is for all other…

Films with Dogs on the film poster. Cause dogs are the best.