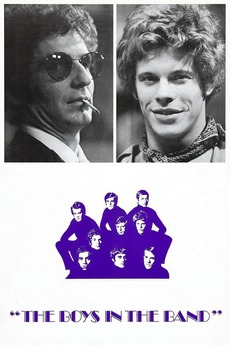 The Boys in the Band
JustWatch

A witty, perceptive and devastating look at the personal agendas and suppressed revelations swirling among a group of gay men in Manhattan. Harold is celebrating a birthday, and his friend Michael has drafted some other friends to help commemorate the event. As the evening progresses, the alcohol flows, the knives come out, and Michael's demand that the group participate in a devious telephone game, unleashing dormant and unspoken emotions.

every gay feature length i've seen ranked by my personal favourites ... bc i’m fed up of going on these…