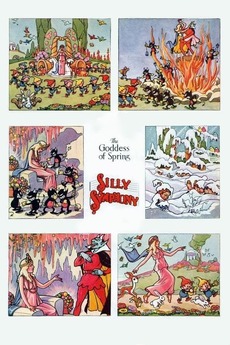 The Goddess of Spring
JustWatch

The Goddess of Spring

The goddess is greeted by dancing flowers and fairies. The devil comes and takes her away to be his queen. She's despondent, as winter settles in above ground. But the devil isn't happy either, and offers anything to make her happy. They reach an agreement: she'll spend six months above ground and six below. Thus we have seasons.

Animated short films made before 1970. Mostly traditional, hand-drawn, and kid-friendly, but also includes some stop-motion and avant-garde works that…

all types, all lengths

Hopefully the most complete list of Disney's animated short films on Letterboxd.

*Please read the notes. I am working on…

A History of Animation – Shorts

A selection of animated shorts in reverse chronological order. Please make a suggestion if you think some important ones are…

Ever danced with the devil in the pale moonlight? Satan in film

I did try and search far and wide here on letterboxd, but I didn't find any list trying to chronicle…